Can You Train Aggression Out of a Dog?

Aggressive behavior in dogs can be difficult, if not scary, to deal with. It is a serious issue that if left unchecked, may threaten you, your dog, and others in the vicinity. Thankfully, all is not lost. It is possible to train and readjust a dog’s behavior, in order to curb aggressive tendencies. Below are some tips on how you can train aggression out of your dog.

What are the signs and causes of aggression?

The first steps toward correcting aggressive behavior involve learning how to recognize it, and understanding what causes it. The term aggression refers to various behavioral quirks in dogs. It is usually a warning that may signal that an attack is to follow, which is why a correction is vital.

A dog can display aggression through growling, standing rigidly, displaying their fangs, barking threateningly, charging at a person, or biting.

The American Society for the Prevention of Cruelty to Animals categorizes aggression in dogs as follows: territorial, possessive, protective, fearful, unsocialized, defensive, experiencing pain. Aggression manifests as the result of many possible causes and is mainly triggered by the dog’s environment.

For example, a dog adopted from a sanctuary might be a victim of abuse. Triggers in their environment may set them off and cause them to be anxious, and consequently, aggressive.

Identify the trigger and address it

Identifying precisely why your dog acts aggressively will help you personalize their training to suit their needs. You can also change their environment by removing things that cause them stress. Learning the skill of calming an aggressive dog is very crucial.

How can I train aggression out of my dog?

Identify who it’s aggressive towards

First, observe who your dog shows aggression towards, whether it is a certain person, strangers, fellow dogs, or other types of animals. Once you’ve pinpointed the reason for your dog’s aggression and to whom it is directed, you can start working to fix their behavior.

It’s best to deal with an expert dog trainer with practice in handling aggressive dogs. If you are unsure who you can call, you can contact your vet for recommendations. Before training begins, it’s also best to have your dog checked by a veterinarian. Sometimes, health issues may cause a change in demeanor, resulting occasionally in aggression.

Deal with it, don’t ignore it

It is critical to address aggression instead of ignoring it. The worst thing that could possibly happen is that someone, or your dog, could get hurt. Sometimes, aggression in a dog may be a sign of an external problem that threatens you as well. Your dog has better senses than you do, so aggression may be a warning sign for other dangers such as intruders.

Do not punish your dog

Never punish your dog for aggression. Dogs are not capable of understanding punishment, and this may cause them to act more anxiously and aggressively instead. The best way to train bad behavior is to reward good behavior. Reward-based training will give your dog positive associations with good behavior and is a better method of socialization.

By taking certain measures to correct your dog’s aggression, you have a better chance of improving their socialization skills. In the long run, this will help them live more peacefully with those around them. 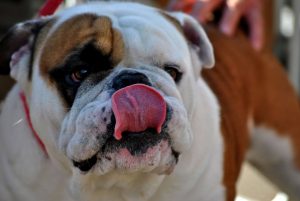 My Dog Regularly Licks My Feet – Why?